4. Face recognition Camera can be inbuilt for both screen

5. Double screen can share the same PCB or has different Android and Windows system.

Big screen is more and more popular in LCD digital signage industry all over the world, more and more customer want 55inch, 65inch and above size. The 65inch floorstanding touch screen totem has two side screens, both are in phone style design, it doesn't look thick as with the silver aluminum profile, we're trying our best to make it as thin as possible.

Two screens can share the same PCB motherboard, also can be with different systems, each screen has its own electronic spare part group, so the double sided kiosk can display the same or different advertising, both screens can sync with each other. Either screen can be with Android or WIndows system, and our factory has remote control software on option, also they support google play service, so customer can run their own APK on screens.

It's easy for us to make it with touch screen by adding 10-point multi touch capacitive film on the tempered glass, just with two piece of touch foil, we can change the non-touch kiosk to be smart advertising totem with man-machine interaction function.

For some media company, they want add face recognition camera to have a data of how many audience view their advertising and their gender to design what kind of advertising display at what time. We have both 5.0mpx and 8.0mpx camera on option.

This man-machine interactive smart touch screen kiosk can be widely used in shopping mall, cinema and resturant as it can be used as a information checking station, also can be put in exhibition center, office receoption desk, hotel and airport as well. 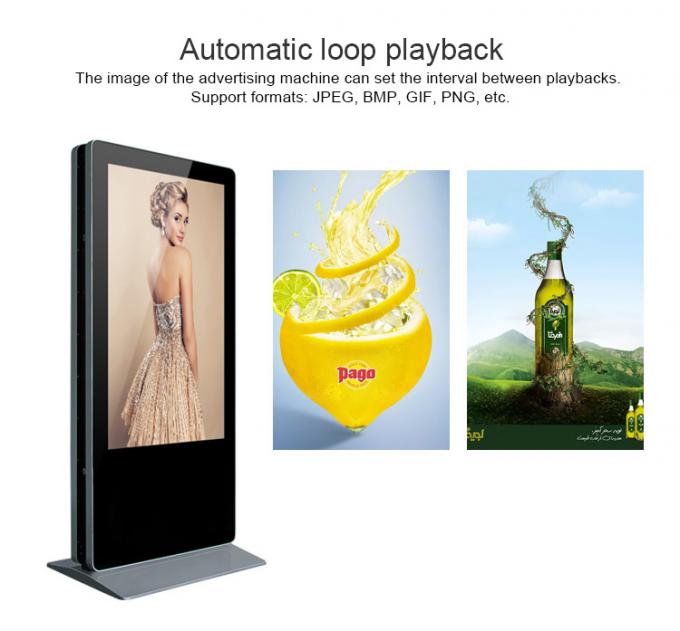